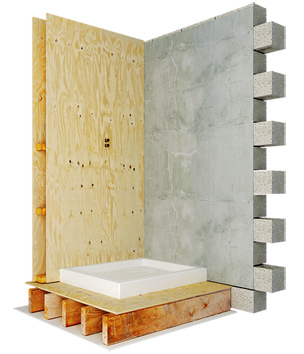 The wall/ledge joint is considered a movement joint for various reasons.

A common cause of joint movement between the wall and ledge is the shrinkage of supporting timber floor joists during the drying out period which is most dramatic after new construction works. When floor joists shrink, the ledge drops down causing the wall/ledge joint to expand.

Another cause joint movement between the wall and ledge is the settlement of bath and shower receptors under the additional load of water and occupant. When receptors settle down the wall/ledge joint expands. Weight settlement is most dramatic in semi-ridged receptors made from materials such as acrylics.

Settlement and deflection of weak floor boards and joist under weight can occur in old buildings, especially at the impact point of supporting bath and shower receptor legs. When floor boards settle down, the ledge drops down causing the wall/ledge joint to expand.

Joint movement occurs as a result of shrinkage in surrounding timber stud walls during the drying process, again most frequent after new construction works. When timber studs shrink, the wall pulls back causing the wall/ledge joint to expand along the horizontal axes.

Other common causes of wall/ledge joint movement can be attributed to the unique nature of the hostile shower environment where materials exposed to high moisture and thermal fluctuations will expand and contract at different rates, creating stress at meeting joints if not accommodated during the design and build period.

HydroHALT on a Movement Joint

We welcome all your comments and questions For technical comments please visit our contact us page. Website comments, email us here please.

Tweets by SealuxLtd
We use cookies on our website to give you the most relevant experience by remembering your preferences and repeat visits. By clicking “Accept”, you consent to the use of ALL the cookies.
Cookie settingsACCEPT
Manage consent

This website uses cookies to improve your experience while you navigate through the website. Out of these, the cookies that are categorized as necessary are stored on your browser as they are essential for the working of basic functionalities of the website. We also use third-party cookies that help us analyze and understand how you use this website. These cookies will be stored in your browser only with your consent. You also have the option to opt-out of these cookies. But opting out of some of these cookies may affect your browsing experience.
Necessary Always Enabled
Necessary cookies are absolutely essential for the website to function properly. This category only includes cookies that ensures basic functionalities and security features of the website. These cookies do not store any personal information.
Non-necessary
Any cookies that may not be particularly necessary for the website to function and is used specifically to collect user personal data via analytics, ads, other embedded contents are termed as non-necessary cookies. It is mandatory to procure user consent prior to running these cookies on your website.
SAVE & ACCEPT